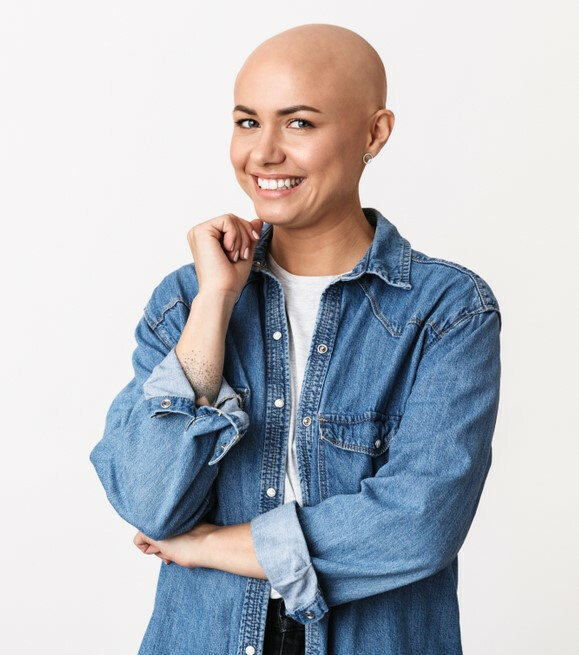 Not all of us are blessed with perfect hair. Mine’s ok, but I’ll never be a TV weatherman. And like most guys of a certain age, it’s getting to the point where there’s less of it ever day.

And I’m ok with that. I can joke about it. I have a beard, so I can always say my hair’s not leaving, it’s just moving south. But not everyone has that option.

So why mention it? Well, August is National Hair Loss Awareness Month. And for many people, both men and women, hair loss is a serious problem.

Let’s face it, all of us want to look our best. How we look affects our mood, and we all have a certain image of ourselves that we maintain. Whether gradual or sudden, hair loss can be hard to cope with.

Many factors can cause hair loss, including chemotherapy and other drugs, physical trauma, even extreme stress. Fortunately, those triggering events often result in the loss being temporary.

One often permanent cause is alopecia, an autoimmune disorder. By far, however, the most common cause of permanent hair loss in both men and women is genetic. Pattern baldness can be inherited from either side of one’s family.

For decades, the only real treatment for hair loss was wigs and toupees. There’s also a long history of products both real and questionable that promised to restore hair (or at least the appearance of it.)

Let’s start with the simplest – spray-on hair, or “hair in a can.” This product, popular in the 1990s, was simply a colored spray with fibers in it meant to make hair appear darker and thicker. The appearance of such products is often questionable.

More recently, medications such as minoxidil (Rogaine®) and finasteride (Propecia®) have been shown to be effective in lessening or reversing pattern baldness in men and women. Both medications can be expensive and have unwanted side effects.

Hair transplants offer a permanent solution to hair loss, taking hair from a place on the patient’s scalp where it’s thicker and moving it to a place where it’s thinning. But this surgical procedure is expensive and can cause (mostly minor) side effects as well.

Toupees and wigs are still popular as well. They are often a case of “you get what you pay for.” Cheap toupees in particular frequently look just that – cheap.

Perhaps the simplest solution is just to accept hair loss as natural. Obviously that’s easier said than done, especially for women. For men, having something in common with Sean Connery, Bruce Willis, Patrick Stewart and Dwayne “The Rock” Johnson isn’t all bad. And Jada Pinkett Smith has become a spokeswoman for those like her who have alopecia, bringing greater awareness to others.

It's important to remember that for many people, it can be a sensitive subject. However, if you’re losing your hair and choose to accept it, why not announce your attitude with custom patches? A patch saying “Bald is Beautiful,” “I’m Too Sexy for My Hair,” or “God Made Only So Many Perfect Heads. The Rest, He Covered With Hair” tells the world you look on the bright side of life.

Ultimately, how anyone chooses to deal with hair loss is up to them, and their choices are worthy of respect. And that's true no matter how much -- or how little - hair one has.