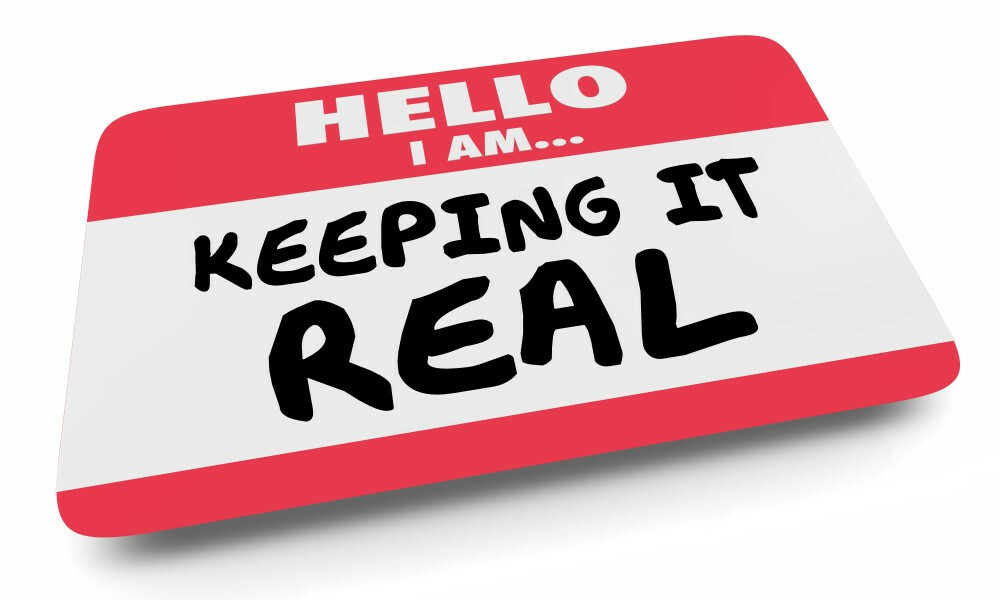 We hear a lot these days about “keeping it real.” Everybody wants to stay true to who or what they are, or so they say.

The key is to stay true to yourself, no matter what others might say, think or do. Putting up a false front defeats your integrity.

Trouble is though, how do you do that? It’s not always easy. Some folks say they’re keepin’ it real when they’re not. Others don’t claim to when they absolutely are. And sometimes things fall in between.

Reality TV can offer an example of all three.

My wife and I often watch and (guilty pleasure alert) enjoy a show on which strangers are brought together and married the day they meet.

They have to commit to marriage for at least eight weeks. A panel of counselors and experts monitors their filmed interactions and offers weekly guidance. At the end of the period, they face a choice – stay married or get divorced and go their separate ways.

About five to eight couples are on the show at any given time. And they interact with each other as well as with their partners.

As you might expect, some couples, matched up by the experts, just click. They fall in love, live happily ever after. Some are unsure, right up to the final decision day. Others mix like fertilizer and fuel oil, blowing up any possibility of a relationship by the end.

One current couple fits the latter description. They’re at a dead end and they both know it. Let’s call them Couple A.

Then there’s Couple B. They’re in that in-between category, showing positive signs, but uncertain which way they’ll go.

The way the show works, if both couples vote to leave the same week, they’re out and go their separate ways. If one votes to stay and one votes to leave, they have to stick around for another week to try to turn things around.

In Couple A, the husband keeps it real. He’s adamant about leaving, and voted to do so two weeks running.

In Couple B, the wife keeps it real. She wants to stay. The husband is questioning, but still voting to stay at this point.

Here’s the twist – the wife in Couple A knows she can’t stand Husband A, and won’t stay married to him. But she has a thing for Husband B. So she votes to stay, in hopes of luring him away from Wife A (who is unaware of what’s going on.) That forces Husband A to stay on the show another week.

Husband B, as noted is unsure. He resists, then eventually succumbs to the charms of Wife A.

Now you can make an argument that Wife A ain’t keepin’ it real, putting up a false front, being nice to Wife B – at least to her face. Not to mention showing contempt for her own husband.

However, Wife A freely admits – to the camera, not her spouse -- the ONLY reason she’s voting to stay is to try to hook up with Husband B. She’s upfront and honest about what she really wants. She’s being true to herself in that respect, as distasteful as that might be to others. So in that respect she is keeping it real.

On the other hand, Husband B isn’t true to his own wife or himself. He acknowledges that he’s conflicted about what to do. He’s about as real as an Elvis imitator.

So what’s the secret to keeping it real? Be true to yourself. Be who YOU are.

And by the way, if you need custom patches of any kind, we’ve been keeping it real for nearly 20 years. Why not show the world the real you with custom patches from Custom-Patches4Less.com?