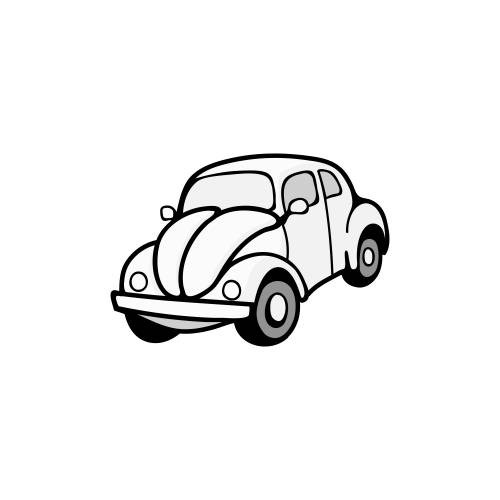 Last time around, we talked about how the good ol’ days weren’t always that great. Sure, there was some glory in the glory days, but there was some angst in the old days as well. Let us recall one of those times, in the form of my dearly(?) departed 1970 Volkswagen Beetle.

Some things are reliable. Custom patches, if properly made, are one of those. You can count on them to last and last. My old Beetle, while properly made for its time, wasn’t.

You may recall the beater Bug from the previous post. It was my primary means of transportation in college. A glorious dark blue with primer-black rear fenders, it was the envy of my fellow undergrads. Well, at least of those who had something worse. Which was pretty much no one on campus.

I won’t say it was my dream car, but I had always wanted one, ever since driving my grandmother’s 1969 model. That one was a lovely shade of what the VW marketing department dubbed “Diamond Ice Blue.” It became a family icon almost from the day she bought it new. Family and friends learned to drive in it, took their driver’s license exams in it. Me, I grew up with it, and got behind the wheel as soon as I had the chance.

That one was stone-cold reliable. She kept it for more than 20 years. I wasn’t so fortunate.

I made the cardinal mistake of unwary car buyers. I bought a mechanic’s car. Worse yet, I bought the car of a mechanic who worked on American iron, not fussy little imports.

I’m not sure how, but that car knew – knew – every time I had the slightest bit of extra cash. It was reliable in that sense. I could rely on it to break down every time.

And it didn’t just break in the expected ways. Weird stuff broke. Like the turn signal switch. Of course, 1970 happened to be the year that VW used a specific design for that switch for only a single year, so it was extra costly. Lucky me.

At long last, I reached the start of my senior year. I had enough money from my summer job to put new brakes and exhaust on the troublesome beast. Driving home from my mechanic, on the interstate, I was happily singing along to the AM radio, confident that it would get me through one more year.

Then I heard the odd, dragging sound behind me. Concerned, I pulled off at the nearest exit, by which time the noise had stopped. The car was still running fine, but to be safe, I shut it off. Got out, looked around. Nothing was obviously wrong.

Now some of you may be familiar with the location of the battery in the old Beetles. For those who aren’t, it was under the back seat. That proved to be a fine location for rust to start – and in this case, to finish.

Yes, the battery had dropped through the rusted out floor. It dragged along Interstate 64 until the cables broke, leaving a perfectly rectangular hole in its place.

Did I mention that I had purchased the battery less than a month before?

So I called – from a pay phone in those pre-cell days -- the closest available person to help – my mom. She was sympathetic to my plight. She only laughed for about five minutes. Then she caught her breath and said she’d pick me up.

As I waited for her, I swear I could hear that car snickering….