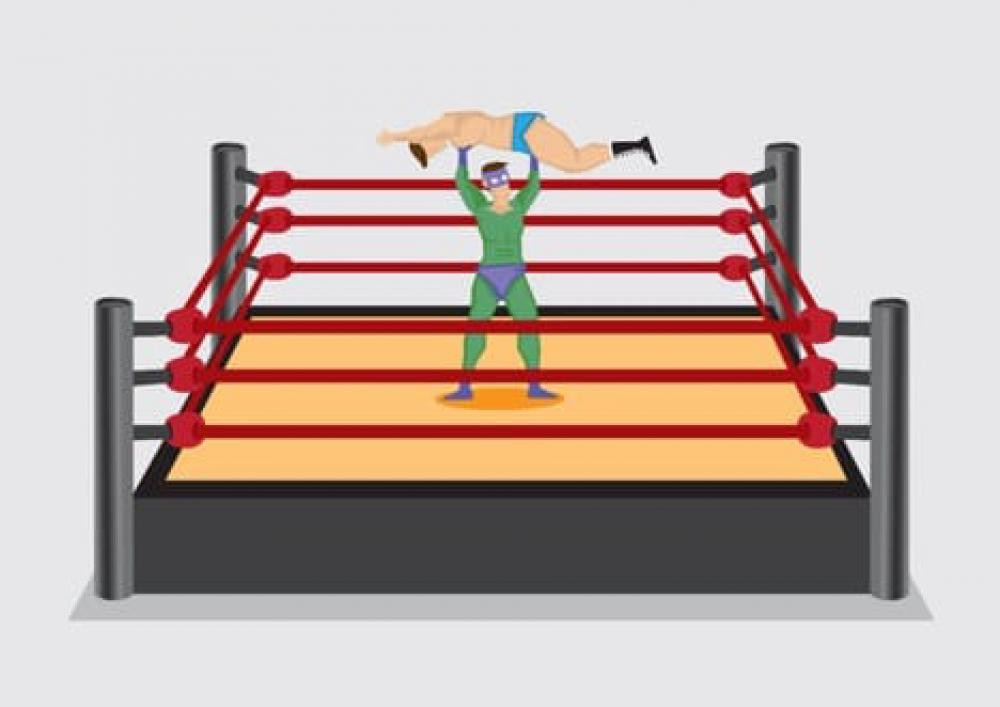 Wrasslin' with Patches, Ray Stevens and the Good Ole Days

Every now and then. it's a good thing to stop, take a step back, and just review some of the highlights/lowlights of our time here. And to remember that life's challenges don't begin and end with whether to buy 100 or 125 embroidered patches.

I think one of my highlights was being a pro wrestling referee for about maybe 100 nights’ worth of bouts in the Upper Midwest. I was in my 30s, and still pretty agile. I worked in some beautiful places, some real pits, and met some unsavory characters, and pretty cool people, but overall, a terrific experience for a young, single guy.

I was there the night police arrested Andre The Giant in Cedar Rapids for assaulting a cameraman. He just snapped that night. He wore this huge leather jacket, and not one area of black leather was to be seen. It was covered in big biker patches, and French and American flag patches.

For years and years as a kid growing up in northern Minnesota, I watched AWA wrestling on Saturday nights, broadcast from a station in Fargo, ND. My brother and I watched in total horror as Mad Dog Vachon and his brother The Butcher just about killed Dr. X and The Crusher. The Vachons hammered The Crusher's head into the turnbuckle till he bled...and kept hammering, and hammering. The Crusher's wounds actually spurted blood in time with his heartbeats according to ring announcer Roger Kent (one of the best of all time!). To a couple of 7- and 9- year-olds, that was life-changing stuff.

Fast Forward 25 years, and I'm working matches in Iowa City. Who's there? The Mad Dog. We met backstage and had a wonderful visit. Not long after that conversation, he got hit by a hit-and-run driver and lost his leg. My mom, then a nurse at the University of Iowa hospital system, took care of him in the hospital and I visited him a couple times. He couldn't have been more hospitable. I guess that goes to his being a gourmet chef! A classic bad-things-happen-to-good-people thing.

Before we met, The Queen was ringside when Jesse "The Body" Ventura, made his ring entrance bedecked splendidly in his hot-pink feather boa, pink butterfly tights and rhinestone sunglasses. He and his partner Adrian Adonis took on Verne Gagne and son Greg in a cage match. The Queen got married on Saturday, and on Sunday she and her then-hubby were watching wrestling on TV. They called for tickets. The call to the box office right before them was to cancel a pair of ringside seats. They went to the bouts, got their ringside seats, and I'll be darned if Jesse didn't hand her the sunglasses he wore to the ring.

During some of my matches, I was a "heel referee" and wore them to the ring. I had my manager, Julie Crabb -- a very accomplished embroiderer by the way --  accompany me to the ring amid a chorus of BOOOs and flying half-full beer cups.

In Duluth, Nick Bockwinkel tossed me over the top rope, and then bought me dinner (well, a cheeseburger and a stale beer) later that night to say “oops.” He later told me he, "meant to throw me through the ropes, not over them." He was the first one to use The Piledriver back in the day. Now it's pretty common on nationally telecast wrasslin' shows, but then, wow. It should have been banned in 17 states the way he did it. Wicked Nick is one of the most articulate people I ever knew. He was a second generation wrestler, and picked up a few things from his dad, and mic-work was certainly one of them.

His partner Ray "The Crippler" Stevens was probably the meanest person I ever worked. He not only pitched me over the top rope more than once, but he genuinely enjoyed hitting people -- me in particular, I guess. He knocked me out cold in Devils Lake, North Dakota, Duluth, and Thunder Bay, Ontario. He was truly an international bad guy. No love lost on my end. There are people here wo think I'm still concussed because of the repeated blows to the head. I'm not so sure...

Out of all of them though, my favorite might be Mighty Joe Macko, "the last in line of the wrestling Gagne family.” If you ever saw Verne or Greg Gagne, and then looked at Joe, you'd know how silly that introduction was. The consummate jobber, he worked hard, but never won a match. Got beat up, and stomped, but I NEVER raised his hand. He'd ref one bout, wrestle in another, and put on a mask and Ace bandage his abundant belly for the Battle Royale at the end of the night. He'd bring an accordion backstage to the locker room and entertain those of us that needed more entertainment and had, without a doubt, one of the worst singing voices ever. But he's an entertainer and was in the best business in the world if you like to entertain people.

I guess the point of all this is this: Take just a moment and look back. As I write this, I'm flooded with memories of hot, sweaty ring gigs, cold showers, and going out in -20 temps to a cold car and driving to the next night's show. Not such a great memory, but some I'll cherish until the day I leave this earth -- except for the knot on my head.