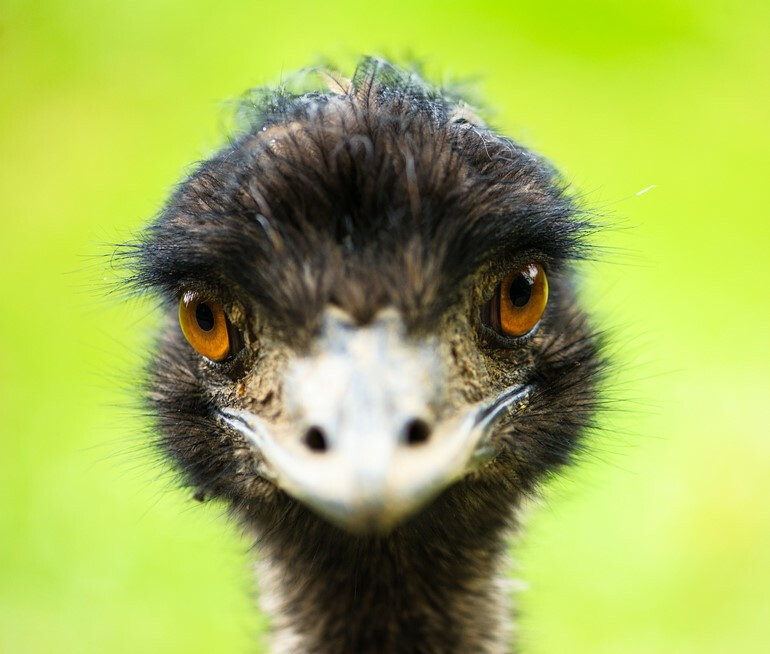 It’s no secret that we’re big fans of emus around here. As regular readers of this blog (all three of you) will recall, we recently spoke of their potential as college mascots. We bemoaned the fact that a well-respected state university didn’t see fit to have an emu as their mascot, even though the school’s initials are E-M-U.

That blog post listed the emu’s multiple virtues as a mascot, including that they have a naturally friendly face. Not to mention the fact that nobody wants to mess with something that’s up to 7 feet tall and can run 30 miles an hour.

We’ll assume that school officials were not moved by our suggestion that they swap their current eagle mascot for an emu one. (We have to assume that, since we haven’t heard from them.)

Maybe this will change their minds. It turns out at least one emu in Great Britain has demonstrated yet another virtue – as a crime fighter.

On July 25th, according to news reports, a driver crashed his vehicle into a storefront in Malmesbury, England. A chef from a nearby hotel ran to see if he could help the driver and passenger.

Instead, the driver and a passenger got out of the vehicle and attempted to flee. Chef Dean Wade chased the driver on foot, for about 15 minutes (a low-speed chase, apparently.) When the driver ran into a field and jumped over a fence, Wade declined to follow.

Why? Because the fleeing gentleman was now face to face with a mother emu, who was determined to protect her little ones.

“I know how protective mother birds are, so I thought, there’s no way I’m going in there,” Wade told reporters.

That proved to be a smart choice.

Wade had warned the driver not to go into the pen. The man reportedly replied “I can fight emus.”

He was wrong. The bird attacked, relentlessly pecking at him until he fled once more. That gave Wade enough time to call police, who promptly arrived and arrested the driver on suspicion of drunk driving.

Now really, Eastern Michigan University, what are you waiting for? If that doesn’t showcase an emu’s ferocity and determination, what does? It’s THE perfect mascot for your school.

Not to mention the fact that custom emu patches are entertaining. Why not create one with an emu wearing a police cap – “the thin feathered line”? Or maybe “speak softly and carry a big emu.”

Indeed, the possibilities for fun patches are endless. For ordering emu patches, Eastern Michigan University Eagles patches or any other kind of custom patches, check us out.

Remember though, don’t drink and drive. And if you do drink, don’t mess with Mama Emu.